The majority of lung cancers can be split into two major groups - either non-small cell lung cancer (NSCLC), which makes up 80-85% of lung cancers, or small cell lung cancer (SCLC). We will focus on treatment options for NSCLC in this review. The decision to choose certain lung cancer treatments over others depends on many patient-related factors. Once lung cancer has been detected and diagnosed, we first need to carefully identify if the cancer cells are localized or have spread to regional lymph nodes or other parts of the body - this process is called staging. For lung cancer staging, we typically use CT scans, PET/CT scans, bone scans, MRI imaging and invasive procedures, including endobronchial ultrasound or mediastinoscopy. Based on the extent of the tumor, staging for lung cancer ranges from I or II (early stage), stage III (locally advanced) and stage IV (metastatic).

Lung cancer treatment decisions are then based upon the stage, tumor location, and functional status of the patient. Treatment for lung cancer typically includes surgery, systemic therapy, radiation therapy, or a combination of these modalities. Systemic therapies include chemotherapy, targeted therapy, and immunotherapy. For instance, patients with early stage lung cancers who are medically able to undergo surgery may be cured with surgery (such as a lobectomy or pneumonectomy) +/- chemotherapy alone. For patients with early-stage cancers who are not surgical candidates or who prefer a non-surgical approach, stereotactic body radiation therapy (SBRT) is a highly innovative technique that has been shown to provide excellent outcomes (discussed further below) in patients that have been diagnosed with non-small cell lung cancer. For more locally advanced stages that are not amenable to surgery, a combination of systemic therapy, such as chemotherapy, and radiation may be the most effective approach. Stage IV lung cancers (also known as metastatic lung cancer) are incurable and treatment is given to improve symptoms and slow down progression. These treatments have advanced quickly over the last few years, and we will highlight some key advances in the fields of radiation and systemic therapy.

When radiation therapy for lung cancer patients first began in 1956 in the USA, it was very rudimentary. A highly potent X-ray machine was positioned close to the tumor, and the machine was turned on. The challenge was that radiation oncologists couldn’t always treat the entire lung tumor and, many times, the side effects were too severe to continue treatment.

As technology improved (Figure 1), we began to utilize CT and MRI scans to help identify the specific location of the tumor and the surrounding normal tissues (like the heart, lungs, liver, among many others). This helped to create a much more effective radiation treatment plan that could better target the lung cancer, and we called this 3-dimensional radiation therapy.

More recently, however, the newest radiation machines have enabled more accurate treatment of the tumor while minimizing radiation dose to the normal body. 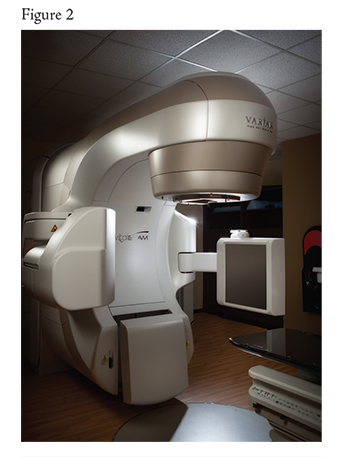 We now use numerous beam angles to shape the radiation dose to the specific size and shape of the tumor – a treatment called intensity modulated arc therapy (IMRT). As technology has further improved, we can now deliver IMRT with an even higher degree of sophistication and conformality with a technique called volumetric-modulated arc therapy (or VMAT). Figure 2 shows the most modern radiation therapy linear accelerator, which is now available at our St. Mary’s and Green Valley offices.

As we have continued to improve our ability to deliver VMAT, we can now deliver very high doses of radiation in just a few treatments. This form of treatment is called stereotactic body radiation therapy (or SBRT) and offers an excellent opportunity to control cancer, reduce symptoms, and improve quality of life in very specific patients. Whereas treatment for these lung cancers used to take 30 to 35 treatments, it can now take as little as 1 to 5 treatments. 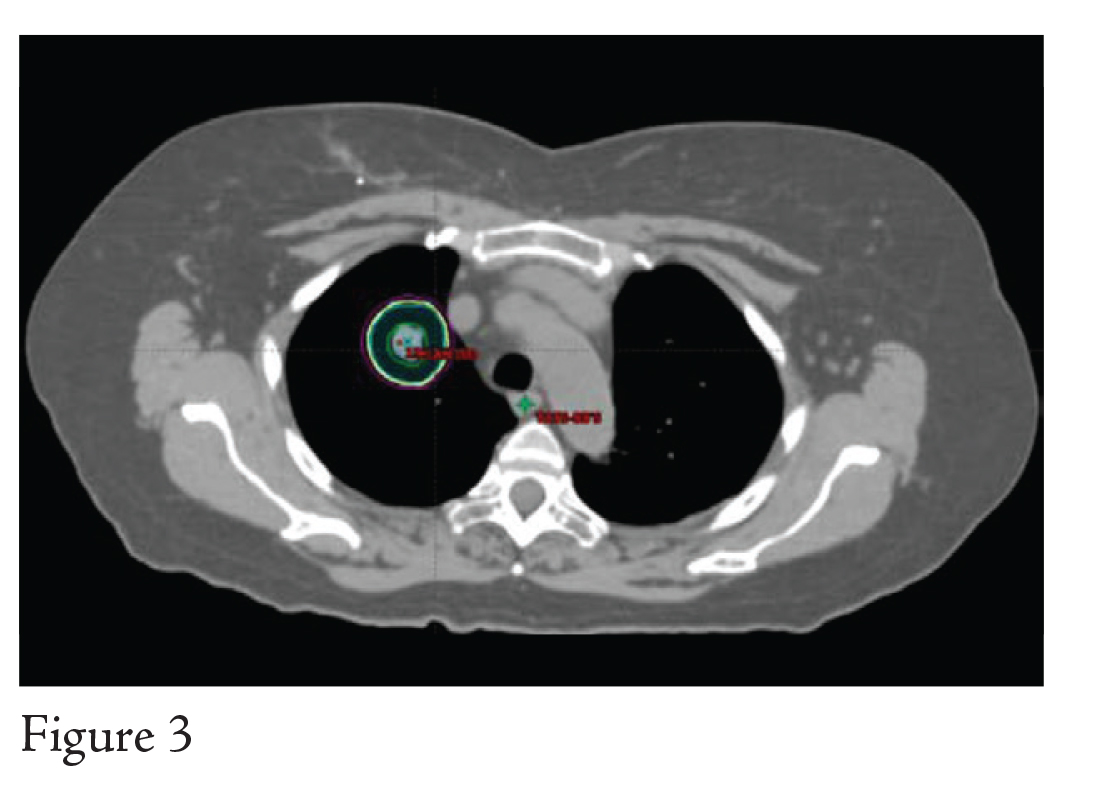 Systemic therapies, which can include chemotherapy, targeted therapy, and immunotherapy, have also undergone significant advancements in the past several years. Chemotherapy has commonly been given to non-metastatic lung cancer patients whose tumors are large, have unfavorable characteristics, or whose tumors have spread to lymph nodes. The most common chemotherapy regimens are typically platinum-based chemotherapy for 4-6 cycles. Chemotherapy can also be used at a lower-dose to enhance the effectiveness of radiation therapy and can be given at the same time as radiation, depending on the clinical situation.

However, the biggest advances in systemic therapies have been made for metastatic (or Stage IV) non-small cell lung cancers (NSCLC). The first step in determining which systemic therapies are most appropriate for patients with metastatic lung cancer is to identify the histologic and molecular features specific to the lung cancer. About 20% of metastatic NSCLC cases have so called “actionable driver mutations” where we have specific systemic therapies that can target the mutation. The known mutations with targeted agents that are approved for treatment are EGFR, ALK-1 and ROS mutations – these mutations are associated with favorable prognoses. Additionally, the expression level of a protein called PD-L1 can help inform the treatment team if the patient is a candidate for immunotherapy. There are many other mutations that have been identified and new clinical trials are helping to identify novel targeted agents for those mutations.

These advances in surgery, radiation therapy, and systemic therapy only serve to highlight the rapid improvements in lung cancer therapies, and multiple clinical trials are underway to continue to push the efficacy, safety, and quality of life of novel therapies for lung cancer.