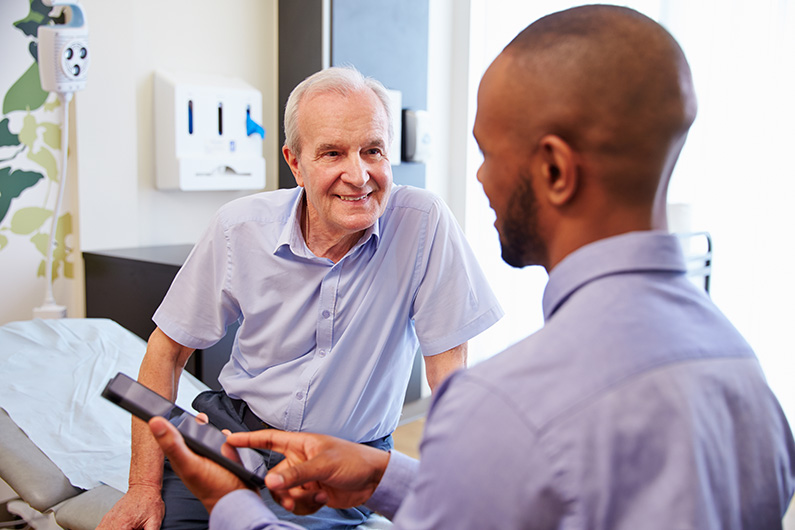 The prostate cancer treatment that’s right for you depends mainly on your age, the grade of the tumor (the Gleason score), the number of biopsy tissue samples that contain cancer cells, the stage of the cancer, your symptoms, and your general health. Your doctor can describe your treatment choices, the expected results of each, and the possible side effects. You and your doctor can work together to develop a treatment plan that meets your medical and personal needs.

Learn more about the different treatment types your oncologist will go over:

If you and your doctor agree that active surveillance is a good idea, your doctor will check you regularly (such as every 3 to 6 months, at first). After about one year, your doctor may order another biopsy to check the Gleason score. You may begin treatment if your Gleason score rises, your PSA level starts to rise, or you develop symptoms. You’ll receive surgery, radiation therapy, or another approach.

Active surveillance avoids or delays the side effects of surgery and radiation therapy, but this choice has risks. For some men, it may reduce the chance to control cancer before it spreads. Also, it may be harder to cope with surgery or radiation therapy when you’re older.

If you choose active surveillance but grow concerned later, you should discuss your feelings with your doctor. Another approach is an option for most men.

Doctors use two types of radiation therapy to treat prostate cancer. Some men receive both types:

Both internal and external radiation can cause impotence. You can talk to your doctor about ways to help cope with this side effect.

Surgery can damage the nerves around the prostate. Damaging these nerves can make a man impotent (unable to have an erection). In some cases, your surgeon can protect the nerves that control erection. But if you have a large tumor or a tumor that’s very close to the nerves, surgery may cause impotence. Impotence can be permanent. You can talk to your doctor about medicine and other ways to help manage the sexual side effects of cancer treatment.

If your prostate is removed, you will no longer produce semen. You’ll have dry orgasms. If you wish to father children, you may consider sperm banking or a sperm retrieval procedure before surgery.

Chemotherapy may be used for prostate cancer that has spread and no longer responds to hormone therapy.

Approved Statement:
While proton beam therapy is not a new technology, its use in the treatment of prostate cancer is evolving. ASTRO strongly supports allowing for coverage with evidence development for patients treated on clinical trials or within prospective registries. ASTRO believes that collecting data in these settings is essential to informing consensus on the role of proton therapy for prostate cancer, especially insofar as it is important to understand how the effectiveness of proton therapy compares to other radiation therapy modalities such as IMRT and brachytherapy.