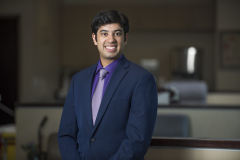 Dr. Thaker is board certified in radiation oncology by the American Board of Radiology.

Upon graduating medical school, Dr. Thaker completed a transitional internship at the Crozer-Chester Medical Center, where he worked with leading community doctors in general medicine, obstetrics, gynecology, and pediatrics. He then completed residency training in Radiation Oncology at the prestigious University of Texas MD Anderson Cancer Center in Houston, Texas - the #1 ranked cancer center in the country by US News and World Report. In an effort to improve the quality of cancer care in patients’ communities, Dr. Thaker also completed a Fellowship in Healthcare Management, where he worked with national leaders in quality improvement and healthcare innovation at the MD Anderson Cancer Center and the Harvard Business School on innovative cancer care delivery initiatives.

During residency, Dr. Thaker worked with leading experts in all aspects of radiation oncology and has helped develop cutting-edge cancer care therapies. He has expertise in treating a wide range of cancers, including breast, lung, head and neck, gastrointestinal, gynecologic, genitourinary, and central nervous system malignancies.

I have a strong devotion to community-based cancer care, and I strive to bring the highest quality of cancer care to patients living close to their homes. I am deeply passionate about helping patients and their families through their fight against cancer, and I believe in patient-centered care, where I combine each patient’s personal values with strong multidisciplinary collaboration and the most cutting-edge standard of cancer care. I constantly strive to maximize the effects of treatment while minimizing side effects, and I work tirelessly to communicate with patients, families, doctors, nurses, and staff throughout their cancer care. Through Arizona Oncology and The US Oncology Network, I am able to bring the latest advancements and clinical trials to patients who need them most.

Dr. Thaker has published nearly 40 peer-reviewed manuscripts, editorials, commentaries, and book chapters. He is an author in the leading Radiation Oncology review book “Radiation Oncology - A Question Based Review.” His work has been published in many journals, including Molecular Pharmacology, Neurosurgical Focus, the Journal of Neurointerventional Surgery, Journal of Clinical Neuroscience, Medical Education, Expert Review of Neurotherapeutics, the International Journal of Radiation Oncology, Biology, Physics, the Harvard Business Review, Brachytherapy, Gynecologic Oncology, the Journal of Oncology Practice, and the Journal of Comparative Effectiveness Research, among others. He has presented his research at numerous national conferences and serves on several national committees.